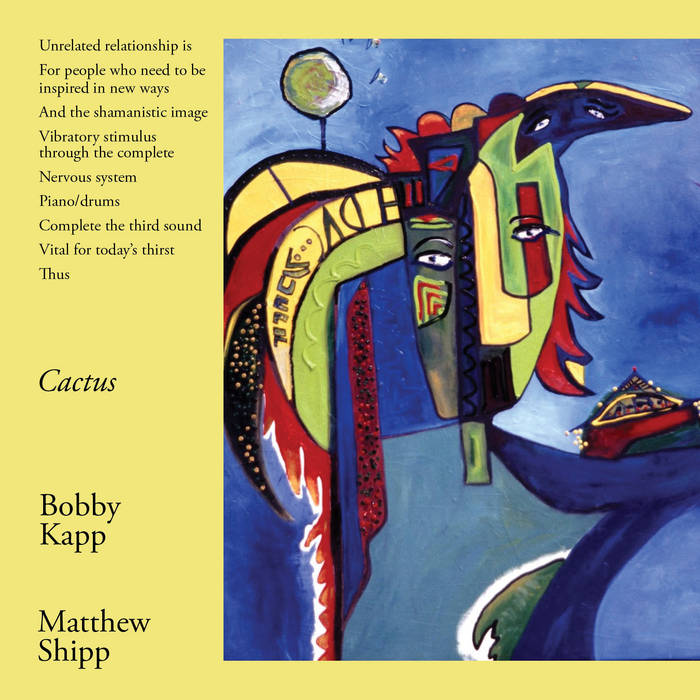 On Cactus, pianist Matthew Shipp and drummer Bobby Kapp find a level of musical kinship nearly unmatchable in the modern jazz lexicon.  Although both are confined to standard playing techniques on standard instrumentation, their raw talent and ear for jazz repertoire guides the listener through a contrasting program of improvisations with biting energy that drives the piece forward with each passing track.  Perhaps one of the advantages of the confinement to standard acoustic practice is the natural, human element that remains central, especially considering the rhythmic connotation of the two instruments at play.  When two melodically focused instruments improvise, it can hard to push ideas forward as the energy provided by rhythm is often lost.  Partially due to instrumental selection, this is not a problem for the duo.  On top of this, the musicality and chemistry that seeps in each area of high-activity remains prominent in the more ambient, quiet sections making for an experience that never falters in intrigue.

Aptly titled “Overture” provides a quick-witted display of melodic piano lines amongst the textural effort of Kapp’s drum set.  The piece successfully frames the work to follow by introducing each player at their most straightforward. “Before” continues the straightforward playing by somewhat hearkening back to cool jazz with loose swing undertones.  In terms of harmony, Shipp finds a slightly more ominous aesthetic, which carries over to the next track “During.”  Here, the record really emphasizes tension with fast-paced, circulating rhythms in the high notes and dramatic, spacey chords to end off the tune.  “Money” signifies another relatively straightforward tune for the duo, leading into the most esoteric track on the record.  Reaching into the piano strings on “Cactus” is essentially Shipp’s only use of extended techniques making the already barren sonic landscape stick out.  On the second half of the album, the duo continues their slew of ups and downs with the elusive moods of “The 3rd Sound” fading out into silence to end things off.

One of the aspects of Kapp’s and Shipp’s relationship is the astounding back and forth that they exhibit.  On many of the tracks, time intervals of one to two minutes will come and go where one of the musicians takes center stage as the other cedes the playing space to them.  Upon re-entrances, a clear trust is exhibited as the musicians leave no direct cue to their partner, yet the choice to come back into the equation remains logical.  This comes into play towards the end of “Good Wood” where Matthew Shipp fades out of the equation, leaving Kapp to solo.  The timing of this brief interpolation is key as the music reaches a relatively stagnant place just before and Kapp’s playing provides a slight instance of contrast to usher in a change in mood for the track.

When playing together, the chemistry also shines.  Kapp takes a rather quiet approach to the drum kit overall and he has an astounding ability to provide some abstract sense of meter while also reacting to each of Shipp’s melodic lines.  On the other hand, Shipp also manages to remain on the same general wavelength of meter by providing fast rhythmic lines as an outline.  To contrast his rhythmic focus, Shipp will occasionally find space for longer melodic lines to give Kapp space to play rhythmically.

Perhaps the album does suffer a bit sonically as there are quite obvious limits to each instrument and very little extended techniques at play.  Those more intrigued by albums that test sonic parameters may be less inclined to enjoy the record because despite some obvious changes in musicality, the aesthetic of the album is essentially the same throughout.  Nonetheless, the duo’s heart remains out on the line enough to inspire further and further listening especially for the modern jazz crowd.

Cactus just never loses its drive.  It’s an easy front-to-back listen with a strong collection of tracks that flow into one another in a rather cohesive fashion.  Bobby Kapp and Matthew Shipp clearly work well together and the combination of their logical trading of ideas and complimentary approach to collaboration make for a highly varying experience.